Emmerdale 25/5 - Ronnie's in the firing line

Ronnie’s terrified to find Sam pointing the shotgun at him, saying he has a message from Lawrence White. Ronnie sees his turmoil and convinces him to put the gun down but is appalled Sam has been bullied into threatening him and decides to confront Lawrence but will Ronnie be shocked at how hostile Lawrence can be?

Holly’s touched when Cain sticks up for her over the van’s petty cash accusations but is left desperate for revenge when she realises Charity took the money. She follows Charity to the salon and when Bernice heads out, applies blue dye to an obliviousCharity’s hair. Holly impresses Cain when she shows him a picture of what she did to Charity and after Cain defends Holly from a furious Charity, Holly leans in for a kiss. Will Cain fall forHolly’s charms or will Holly be left devastated by his harsh rejection?

Jimmy uses minding Ashley as an excuse to get out of his chores, but his plan to go to the cricket is thwarted by Nicola. When Ashley wonders why Jimmy’s there, Jimmy blames marital problems to prolong his visit and a sympatheticAshley listens but Jimmy has a plan when Dan says he needs somewhere to study and tellsDan about having to discretely mind Ashley. Elsewhere Rodney returns, but he’s gutted to receive a lukewarm reception. 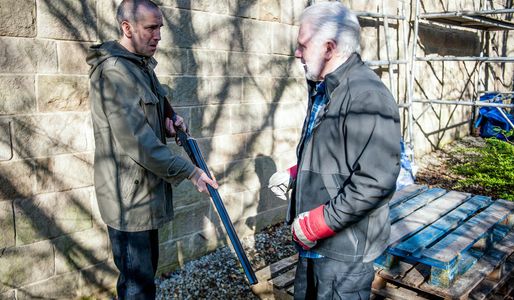