Charity's uneasy to learn Finn's hosting a comic convention in the village hall but she’s taken aback by the effort he's gone to and likes the thought of all the cash. However, Ross fumes when Finn's arrested for handling stolen goods and James and Emma despair to learn Ross was in on the deal with Charity. Can he persuade Charity to get Finn out of trouble?

After spending the night with Tracy, David fumes to realise she knew about his illness and thinks she slept with him out of pity. David confronts Pollard about telling Tracy but Tracy knows he's just lashing out and warns him not to push Pollard away.

Lisa pleads with Rishi to give Belle her job back and he’s left thoughtful when Joanie suggests he give her another chance. Belle and Lisa are chuffed when Rishi offers Belle her job back but will Belle be able to cover when Lisa suggests she ask her boyfriend to the pub for tea? Megan finally agrees to let Jimmy look after Eliza. Jai finds Jimmy and he's chuffed to see his daughter smile as he joins Jimmy for a drink. 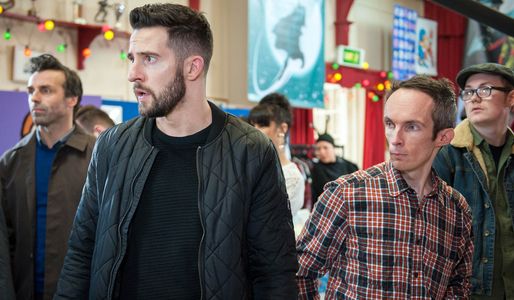