Jai gives Megan the courage to test Charity’s true intentions as otherwise she’ll have played right into Charity’s hands when she decides to leave the company. Megan fumes when Charity is forced to admit she has taken advantage of her. Later, Megan braves it out by coming clean to Declan she caused the miscarriage. Charity comes into the room just as she is telling him and is aghast to realise what Declan is being told. How will Declan react to Megan’s shock confession?

Ross doubts Donna’s hot car list is for real until Cain checks it out for him. His suspicions fade when the list of stolen cars turns out to be true, thus saving Ross’s bacon. Realising Donna is not as squeaky clean as he thought Ross agrees to help her out with a job. His change of heart puts Donna in a spin. Will she get to the loot before the bin men do and does this mean her chance to make money could be back on track?

Finn plucks up the courage to tell Simon the truth about his identity but panics when he sees him with Victoria. As Finn braces himself to come clean, James walks in and everything changes...

Sean is left reeling on receiving a letter telling him to testify against Belle at the upcoming trial, but will he be able to betray the girl he loves? Chas feels ignored by James so decides to catch his attention but will her methods work on this preoccupied farmer? 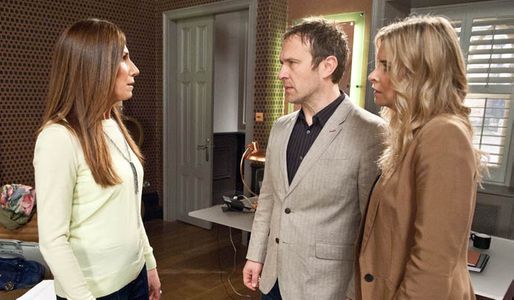 Emmerdale 26/05 - Sam's relationship is in question