Emmerdale 26/06 - Debbie is confused by her feelings

It’s Moses’ Christening day but Debbie’s distracted. The new vicar conducts the service in the church surrounded by the Dingles. As they leave the church Zak’s spotted Debbie is troubled and tries to reach out to her, telling her she can tell him, Debbie looks over towards the garage where she can see Ross. When the police arrive to talk to Debbie over Jai’s stolen car, Debbie secretly guesses it was Ross but is worried they want to search the garage. Will they find the car? Missing the party after the Christening Debbie feels the chemistry between her and Ross at the garage. She calls Pete to tell him she needs to stay longer at the garage. Debbie hides some dodgy invoices in case the police return, but the truth is, she wants to be near Ross. Alone together Debbie opens up to Ross telling him she feels trapped. He asks her what she wants but Debbie says she doesn’t know but soon her actions make it clear as she pulls Ross towards her...

Harriet is no fool and realises Ashley’s struggling with his memory. Later she confronts Ashley telling him she feels hurt and accuses Laurel of not helping the situation. Laurel’s upset she’s in the way of their relationship and goes to see Harriet over it. Marlon is not himself at the Christening, desperately missing Laurel and distraught how upset Laurel is. He resolves to do something about it. Soon Marlon has a proposition for Laurel.

Aaron desperately calls Cain, asking him not to act on what happened yesterday. However, later that afternoon Robert is visibly troubled. Robert is left both scared and angry. Soon Aaron is left unnerved by Robert’s reaction.

​Debbie and Pete are preparing for Moses’ Christening. The new stand-in vicar calls them a lovely family. Kerry asks Lisa about Kyle but is warned to give Joanie some time. Moira’s unimpressed when Cain doesn’t attend Moses’ Christening. 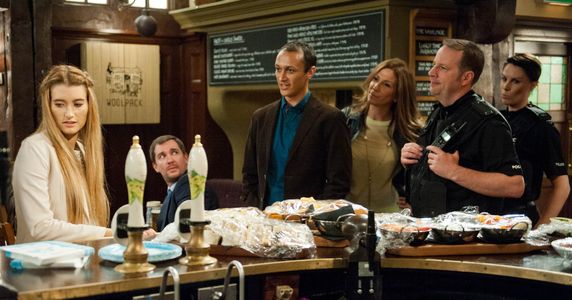 Emmerdale 11/06 - A confused Debbie visits her mum in prison