Cameron feels uneasy as the police make door-to-door enquiries, but Debbie mistakes his dark mood as grief over Alex' s death. Alex's granny Beattie arrives and insists to Edna that Alex would never have robbed her. She then asks Cameron to organise a memorial for Alex - will Cameron be able to stifle his guilt?

Elsewhere, Rhona desperately calls Gary for more pills and sinks to a new low when she has to hand over her wedding ring for payment.

​Meanwhile, Paddy's convinced she's cheating. When Laurel sees a man entering the cottage, she wonders if Paddy is right after all. She tells him and Paddy sets off to confront Rhona, who's being told by Vanessa that she needs to go to rehab…

Also, Victoria gets suspicious when the police interview her and ask about Alex's relationship with Declan. She later confronts him, throwing a bunch of flowers down and telling him to put them where he left Alex to rot. 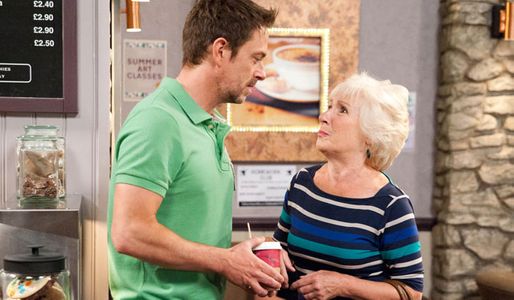