It's moving day for Ashley and Laurel but they're soon reminded of Ashley's condition. Laurel falls off a ladder and is left shocked when Emma, checking her blood pressure, suggests she may be pregnant. Laurel’s troubled and wonders how she can look after both a baby and Ashley but how will Ashley take the news?

Paddy’s alarmed by Marlon's interest in Tess and feels hypocritical, warning him off by telling him she's a married woman. Paddy's awkward as he later asks a frosty Tess if she's interested in Marlon but Tess reveals she’s hurt over his accusations with the social worker.

Chas and Lisa agree they're better off without men. Zak's pleased when Belle arrives but she's only dropping off his post. He suggests he could give her some secret driving lessons but she leaves, angry.

Chas tells Marlon she's got someone else who's interested in the pub and clearly has high expectations of the call she's about to make. Realising Kirin is struggling, Vanessa suggests he take paternity leave. Leyla is happy to see Nikhil and Jacob bonding and is happy to play house. 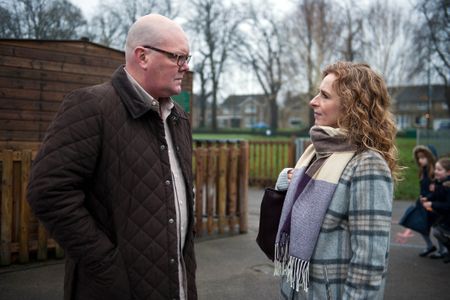