Kerry’s unease grows as she tries to convince herself she just has a stomach bug. But when she’s overcome by nausea she feels certain she’s pregnant. After a few interruptions she does a pregnancy test but doesn’t dare look at the result. When Joanie returns she confides her fears. Later Kerry finally checks the test and is devastated to see it is positive.

Frank has breakfast with Megan having spent the night together and insists on buying her lunch later. But Charity lets slip to Megan he’s an ex-con and not just back from Australia. Megan fumes with Leyla for not having told her. Meanwhile at theWoolpack, Frank turns up for his date but will Megan be as keen as before?

Charity confides to Diane she's had enough of being a landlady and cosies up to Ross to make some money fast. Moira susses Holly has a date and tries to fish for information. Meanwhile on a country road, Jai invites Holly to come away with him so they can get to know one another. Jimmy’s unsettled to run into Lydia again and Nicola is jealous to see her squeeze his shoulder. 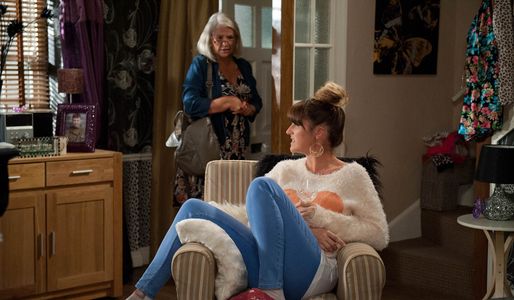 Emmerdale 13/06 - Kerry's in a critical condition