At Home Farm, Lachlan insists he feels sick and can't go to school and Chrissie's troubled. Elsewhere, Alicia tells David she's not in the mood for a trip away. Later, Chrissie's sickened by what Lachlan says...

The B&B is still in a dreadful state after Tracy’s mess up but a poorly Val is rushing to get it fixed before the awards. Finn and Pollard are surprised when Val sacks Tracy. Pollard heads out after a call from David. Water hisses out of a pipe where Pollard has put a nail through it. Everyone's soaked when the pipe bursts and Pollard's guilty as a suspicious Val stares at him.

Tracy uses underhand tactics to try and get what she wants. Zak's troubled for Samson.

Nicola makes it clear to Jimmy she wants a holiday. Rodney asks Nicola what she has planned for Jimmy's 50th, saying she should make it special. 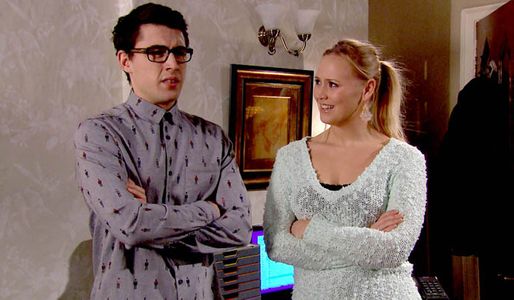