Belle is chuffed when Dr Bailey gives her a necklace but their date is interrupted when he takes a call and has to go on a house visit (Lisa’s had an angina attack). Whilst at the Dingle’s, Bailey sees a picture of Belle in her school uniform. Will the penny drop about Belle’s age and how will Belle feel when she realises Bailey was in her house?

Finn’s furious at Ross after being arrested and is adamant he’s not getting a criminal record. Charity and Ross see Finn showing the police into Dale View and they believe he’s going to tell them everything but Finn decides he’ll keep their names out of it, but it will come at a cost…

Pierce insists on cooking Rhona breakfast and it’s clear she likes having him around but she’s left frustrated after a call from Paddy. Pierce suggests Paddy should maybe speak to Leo from Marlon’s house from now on. Will Rhona take his advice?

Jimmy suggests to Megan she should let Jai look after the baby. Jai is chuffed when Megan suggests they come to an arrangement with Eliza. Priya’s amused by Rakesh’s confidence as he watches a DIY tutorial. 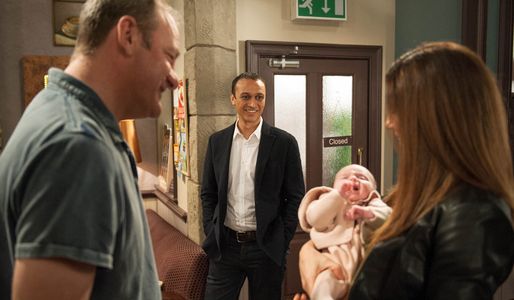