Adam is devastated to discover James is his dad and heads to the Dingles in search of Zak’s shotgun. James is sick of pretending and determined to talk to his sons about Adam but Chas is worried how Cain will react when he discovers she already knew. At the Dingles, Sam hands Adam the shotgun believing it is for Zak and Adam leaves in search of James. James tells Chas he told his boys and they won’t want to talk to him again but as he leaves the pub, we see Adam follow him. Meanwhile, Cain finds Moira’s car in the woods and freezes as he hears a gunshot…

Megan leaves Leyla feeling belittled after telling her there is no way Jai would consider her offer but Katie encourages Leyla not to give up. Leyla has a drink to build up her courage and challenges her to see who can make the most money in two hours.

Unaware of his troubles, Donna rejects Ross but later feels for him when he announces that Adam is James’ son and Sandy is annoyed at being banned from the Malt’s cycle ride.

Farm life at the Bartons is in pieces and the scandal is the talk of the village.

Donna and Ross talk to each other about their dads. Ross tells her he hates James and Donna explains how her dad was killed. Feeling closer to Donna, Ross leans in for a kiss.

Leyla asks Katie and and Alicia in to help her sell burgers from her street barbeque and decides to lure the cyclists in with a revealing outfit. Her tactic works, and Leyla wins the challenge, making £100 profit. Megan’s floored but will she be more annoyed when Jai makes a decision on who will invest? 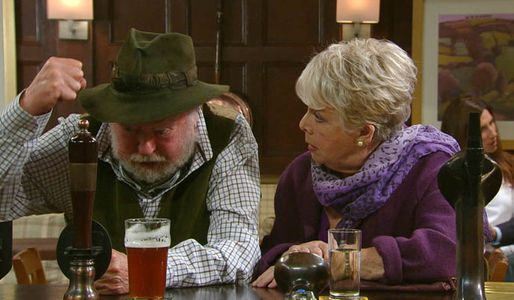