Laurel continues to lie to Ashley that she doesn't want the baby because of her previous drink problem but Ashley's adamant she can't terminate it. Laurel admits to Nicola she can't face losing her baby but has to because of Ashley's condition. Doug's blunt with Ashley and tells him to put Laurel first. Will Ashley go against his personal beliefs?

Kirin's determined Rakesh has nothing to do with Johnny as he says he's taking paternity leave. He’s relieved when Rishi offers to cover the business for him, leaving Rakesh hurt.

Aaron's troubled at the distance between himself and his mum. Later, Chas tells Lisa she's found a business partner but is keeping it a secret for now.

Joanie tries to encourage Lisa to help Zak and Belle get their relationships back on track but she takes revenge on interfering Joanie by dumping off Zak’s pigs at Dale view. Zak suggests to Joanie they go and stay in Abe's place in Ireland for a while.

Paddy suggests he is happy to go to the vet conference on his own but clearly has a plan when he invites Tess. 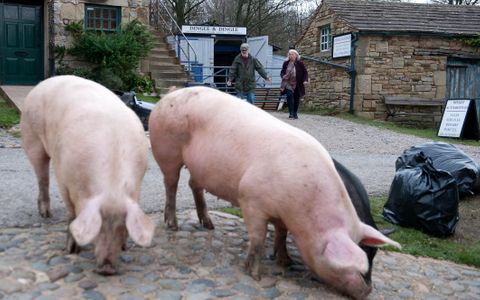 Emmerdale 27/05 – Declan is determined to be a dad