Charity and Cain prepare to leave the village. But does Charity have some misgivings as she says goodbye to Moses.Ross is hard with her and she seems genuinely torn. Charity returns to the pub having said her goodbyes ready for her new life with Cain. Not long after the Dingles wave Cain andCharity off. On a country road they stop the car.. And Charity’s world falls apart...

Chrissie complains about Rebecca and Lawrence implores her to try with her. Meanwhile, Rebecca announces she wants to work for the business. Chrissie wants Lawrence to get rid of Rebecca but Lawrence refuses to take sides. Later, Chrissie offers to show Rebecca around the grounds, playing nice, the sisters seem to be bonding. But for how long?

Tracy returns from honeymoon and accidentally volunteers to have Frank to stay with her and David. Kerry gives Doug and Diane tickets to a talk in Leeds and persuades Bernice to throw a Halloween party in their absence. But will her plan work?

Devastated Charity’s world is in pieces as Cain refuses to leave with her. She screams at him to drive but he just can’t leave.He gets out of the car and gives her the keys telling her to say hi to Debbie. She begs him not to do this warning him he'll never see her or Debbie again, but he doesn’t turn around as he walks away. Charity is broken. She eventually drives away and Cain’s pained to see how much he’s hurt her. Later, we see a heartbroken Charity rev the engine, with the car poised to go over the edge of a cliff...

Late, Lawrence tells Chrissie he’s made her and Rebecca co-managers of the business. Chrissie fumes and later reassures Lachlan she won’t letRebecca win.

Joanie and Lisa are at loggerheads with causes Lisa to have a funny turn. Joanie is jealous of Zak’s attentiveness towards Lisa. Kerry plans her Halloween party still awkward around Dan.​​​​​ 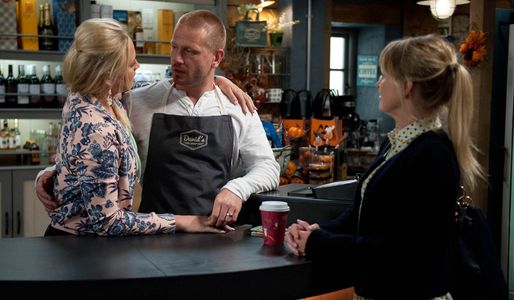