The police arrive to question them at the hospital and Lachlan worries. Diane susses Andy slept with Bernice and encourages him to tell her what’s happened to Lawrence. Chrissie and Lachlan are alarmed to hear the police are searching the grounds at HomeFarm. Chrissie heads off and finds the gun’s hiding place but sees the police approaching and makes her escape. Later at the B&B, Chrissie is hurt to overhearAndy leaving a message for Bernice on the phone and her priorities quickly change from protecting Lachlan to getting revenge…What will she do??

It’s awkward for Carly and Marlon after sleeping together the night before. Vanessa’s shocked to learn what has happened from Carly while Marlon confesses to Rhona. They both privately admit they thought it was great but worry about spoiling their friendship...

Gabby’s disturbed to learn burglars might have been watching Home Farm and worried about Lawrence but covers it. Gabby masks her family turmoil with stealing and lies and swipes Pearl’s brooch. Adam urges Victoria to go back to the food van and Harriet gives him an idea to help encourage her. Later Victoria is touched by his efforts.​​ 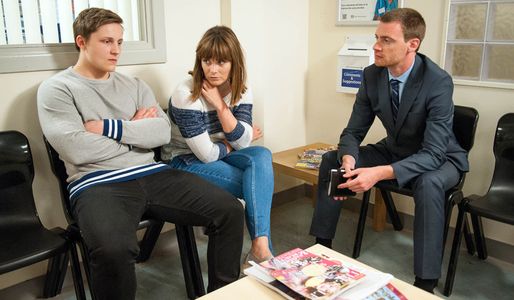