Ross and Charity carry out their scam to steal a dog for a reward. But when the plan goes awry, they’re both left trapped on top of a climbing frame being harassed by a Rottweiler. Ross is shocked to learn Charity plans to leave and furious she plans to take Moses. Later, Ross kisses her and Charity responds, only pulling away when a police car shows up with Cain. Later Ross is affronted to realise how quick Charity has dropped him for a better offer - Cain…

Kerry is on the brink of telling Dan the truth when she’s interrupted. When he’s gone, Kerry confesses the truth to Joanie, explaining she has to get rid of the baby because it was Ross she slept with. Joanie tries to dissuade her, but willKerry listen? Later, Kerry goes in for an obligatory counselling session at the clinic but is dismayed to learn she has to wait to get an scan before she can have a termination.

Nicola is suspicious when Jimmy makes excuses over her joining him at ‘toddler group and she secretly follows him. In the Village Hall, Nicola sees what is going on and to Jimmy’s shock, joins the group. Surely things can only get worse for Jimmy? Marlon and Carly swap traditional roles but Marlon isn’t happy. Jai tells Holly he believes in her.​​ 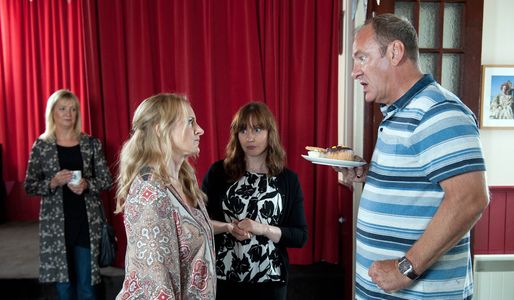