Paddy and Tess arrive at the hotel, both excited about their night away together. Meanwhile, Rhona discovers they've got through to the panel stage of the adoption and she calls Paddy, interrupting his moment with Tess to tell him the good news. Vanessa encourages Rhona to go and surprise Paddy at the conference, whilst Tess returns to the hotel room to find Paddy packing as he gives her the news. He's determined to go and see Rhona and tells Tess it's over between them. Meanwhile, Rhona arrives at reception and begins to head up to his room...

Laurel tells Ashley the doctor has advised her to allow herself more time to make a decision and has referred her for counselling. Laurel admits she's not sure she's doing the right thing and he tells her she can't ignore her feelings and they are united. Later, Laurel comes downstairs after a shower and is scared as she tells Ashley she's bleeding.

Lisa's moody as it would have been her and Zak's wedding anniversary. Kerry tells Belle he and Joanie have gone to house sit in Ireland. Belle's adamant Lisa shouldn't find out but it’s not long before Pearl puts her foot in it.

Noah's hurt when Cain gets a visiting order from Charity and he's not been included.

In the hotel, Paddy and Tess panic when Rhona arrives at their door. Paddy forces Tess into the bathroom and Rhona invites herself in, wanting to be with him after the happy news. She wants to go for lunch and celebrate, as Tess listens from the bathroom. Once Rhona's in the corridor, Paddy tells Tess to go. He tells Rhona he's booked a table in the restaurant but is horrified when Rhona spots Tess and calls her over. Tess lies she's there with Pierce and accepts as Rhona invites her to have champagne, much to Paddy's horror. Tess plays Paddy and he's sure she's going to reveal their affair, woman scorned.

Laurel's in a rush to get to the hospital, blaming herself for losing her baby. The sonographer tells Laurel she can see a sack but no heartbeat but cannot say for sure if she's lost the baby. Laurel's advised to wait and take it easy. Back home, Laurel's devastated and continues to blame herself as she tells Doug she's lost her baby, not wanting sympathy from him or Ashley.

Lawrence is unimpressed with Nicola having baby Carl at work and tells her she needs to sort something out quickly. Emma tells Noah he needs to get Cain on side to stay at Butler's once Charity’s out of prison, offering to help him. 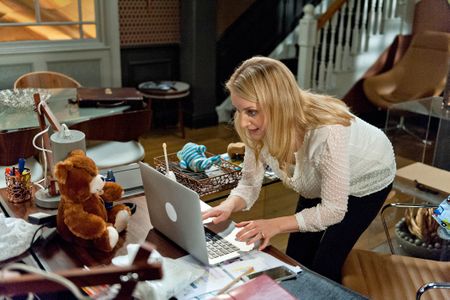 Emmerdale 14/1 - Will Tess ruin things for Paddy and Rhona?