Cain finds Emma in Holly’s room and orders her out but she just ignores him. He’s certain she’s up to no good and drags her outside.Shocked Moira reveals she had asked Emma to pack up Holly’s clothes and Cain realises he’s been played and is forced to walk away. Emma tries to make Moira see she’s a prisoner in her own house while Cain’s camped outside in the caravan. Moira heads out deep in thought and Emma wonders if she’s said enough.

Tracy and David urge Frank to go to the police. Guilty, he pretends he’s going to give a statement at the police station. Later, Tracy and Vanessa call the police and Frank asks to talk alone to the suspicious constable, who doesn’t buy his story. He pretends he had the charity money on him when someone from his past caught up with him. Will the police believe his story and will he tell his daughters the truth?

Lawrence comforts Chrissie about Lachlan’s plea. They’re both hostile when Rebecca hints they should prepare for the worst,blaming her for the situation. When the sisters argue Lawrence sides with Chrissie andRebecca’s stunned but how far will she push him?

Whilst visiting him in hospital Finn pretends to a nurse he’s Kasim’s boyfriend. Marlon and Carly tell April they’ll all spend Christmas together and that Carly may move in with them one day.​​​ 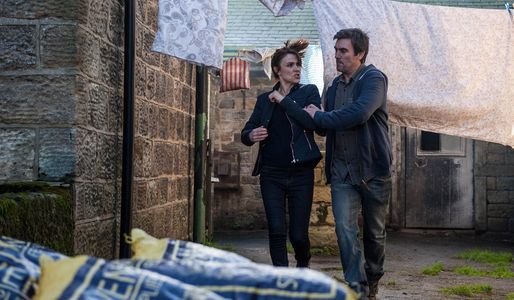