Rakesh sets up an alibi in David’s shop deliberately making it known he’s very much present and around. But soon he’s sneaking off to the bathroom where he makes a dash for his flat conversions at Mill with a backpack. He is upset to see how nice Priya’s made the place, but grits his teeth he then starts smashing the place up and daubing the walls in graffiti.

In the café Nicola realises she and Jimmy have left their bag of sex toys at Mill Cottage she heads over to the house and sneaks back in.

Priya excitedly puts some finishing touches to Mill eager for Rakesh to get a lovely surprise when he sees them. Ronnie is perturbed to realise Rakesh hasn’t told Priya about the dry rot!

In Mill Rakesh continues with creating destruction and pours white spirits over the flat, only saving Kirin’s basketball medals. He strikes a match and runs out...

Locating the bag she makes to leave but hears smashing from downstairs. She hides until it goes quiet then steels herself to face whoever’s out there. But as she opens the door, she’s met by a wall of flames. Nicola runs for the door but a box of white spirits explodes, bringing down scaffolding and knocking her out. Trapped,she screams for help. Ronnie and Dan hurry to the burning building and plunge in...

Ronnie warns Lawrence about Bernice’s outburst and he gets vicious, telling Ronnie he wishes he was dead. Lawrence returns to Bernice at Home Farm,repentant for messing up with her. He is alarmed to learn she’s told Andy everything but swears to her that he isn’t gay. Bernice agrees not to leave him, but is clearly still conflicted. 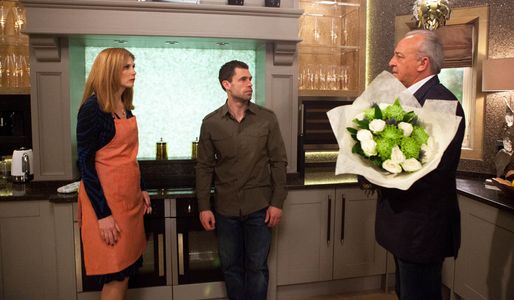