Emmerdale 28/7 - Will Laurence put Lachlan in the frame?

In the police station, Andy’s frustrated the police aren’t listening to him. But it’s not looking good for him. Meanwhile in the café, Diane tells Chrissie and Lachlan that Andy’s been arrested. Chrissie feigns shock and Lachlan’s genuinely horrified.Meanwhile in hospital, Ronnie begs Lawrence to wake up.

Ashley helps Gabby choose one of Laurel’s dresses for her pony club party but she overhears Victoria talking about her new dress.Gabby upsets April when she returns the necklace, and Victoria tells Gabby off, leaving her humiliated. Liv encourages Gabby to still go to the pony club party and she lies and says she has permission to borrow Victoria’s dress. Liv’s uneasy at this,but goes along with it. She’s shocked, however, when Gabby breaks into Keeper’s cottage with a rock.

April invites Carly round but Carly declines and Marlon is disappointed. Can they fix things? Chas shows Charity a competition for best Publican and Charity enters it immediately.

With Lawrence awake,Chrissie begs him not to say anything to the police about what Lachlan did. Andy’s relieved to hear Lawrence has woken up and dares to hope his ordeal will soon be over.

Gabby is in mid raid with Liv when they hear Victoria return. Gabby pulls her hood over her head and makes a run for it but Victoria slams her against the wall. Will Gabby get away without Victoria realising it’s her?

April sees Marlon and Carly are awkward and tells them to talk. Lisa urges Ronnie to tell Lawrence how he feels.​​​​​ 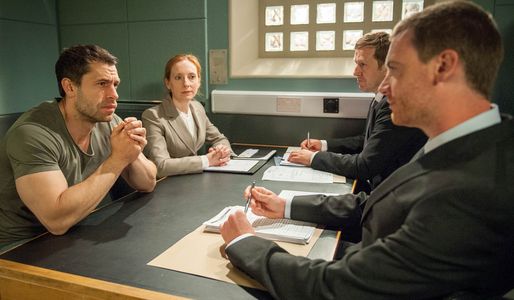 Emmerdale 26/7 - Lawrence is shot by a troubled Lachlan