Pete’s in turmoil hoping Emma will just leave the village quietly so he doesn’t have to tell his brothers the truth. A bitter Emma heads to the Woolpack where she tells James what happened with Pete yesterday. Later, James attempts to speak to Pete. Emma is devastated by James’ betrayal and heads to the farm to confront him. They argue bitterly whilst James get’s some machinery set up. James is distracted by their argument as he secures the hoist. An angry Emma lashes out causing the pallet to crash down on James, pinning him under the load. Emma checks James to see if he’s breathing, he’s not. She hesitates when calling an ambulance, takes one last look at James and walks away, leaving him to die…

Kerry forms a plan to get Tracy out of Sam’s life but will it work?

Robert suggests he and Aaron spend another night in a hotel and Aaron’s unable to resist time alone with Robert. Later, Katie earwigs on Robert’s phone call to the hotel. Convinced she’s finally got him and determined to show Chrissie her fiancé’s true colour, Katie decides they should follow him.

Jimmy’s shell shocked by Nicola’s determination to make a baby and asks Bernice if he can hide out in the salon. But later Nicola is upset over her situation. Jai makes a big decision. Aaron lets it slip to Paddy he’s dressing up smart for a guy but quickly regrets telling him so much.

James lays pinned under the pallet, pale faced and bloodied. Emma flees from the scene, leaving James to die. She changes her tack, when she sees Pete arrive and calls for his help. Pete runs over to Emma who snaps into nurse mode and tells Pete to call an ambulance. James isn’t breathing and doesn’t have a pulse. Soon the paramedics arrive….

Aaron arrives at the hotel, unsettled by the grand surroundings. He’s wary as he lets himself into the room but is surprised to find a games console and beer. He’s chuffed Robert has made him feel at ease. Meanwhile downstairs, Katie and Chrissie arrive at the reception but there’s no one checked in under Robert’s name. Behind them Robert arrives, oblivious to his dangerous near miss. Robert joins Aaron in the room and they kiss. Outside Katie sees Robert’s Car and she and Chrissie head inside. Soon they are on the hotel corridor near the room. But Robert soon gets wind all is not good when he looks out of the door and spots Katie and Chrissie. He makes a hasty phone call; can he stop Katie and Chrissie in their tracks?

Will Katie at last manage to prove to Chrissie her husband to be is not to be trusted? 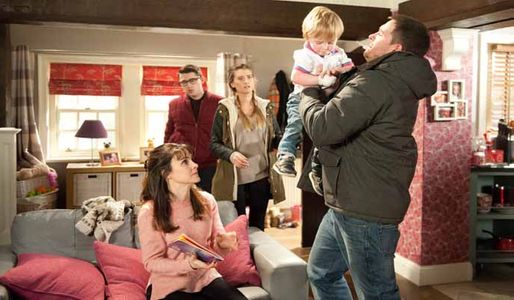 Emmerdale 14/01 – An angry Emma leaves, but not before heading towards Moira's farm