Having checked his symptoms online, David’s concerned Pollard might have prostate cancer. Pollard covers a flicker of unease as he reluctantly agrees to go to the doctors but only if David will get himself checked out too. At the doctors, Doctor Bailey reassures David, Pollard’s in good hands and encourages David to get checked over anyway whilst he’s there.

​Moira tells Holly she’ll be working at the garage to pay back her debts and Holly’s not happy when Cain tells her she’s going to be washing cars. Later, Moira confides in Adam that Holly has been taking drugs again and she has had to pay off her dealer. Moira’s determined to keep her daughter safe this time but is that really the end of it?
​

Laurel accepts when Ashley assures her he’s made the right decision. However, Harriet’s clearly worried as he goes to call the bishop.

Victoria’s excited when Megan says she’ll sort out an agreement with her street food business. Rishi tells Lisa he’d like to look at the house, as he’s interested in the land. Leyla reassures Jacob that Tracy fancying David is nothing to worry about.​ 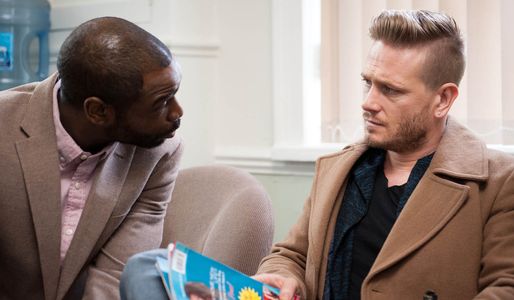 Emmerdale 29/04 - David goes under the knife