It’s the morning after and Debbie and Ross are still asleep on a makeshift bed in the garage. Meanwhile, Pete is worried about Moses who has a temperature and James tells him they need to take him to hospital, immediately. On getting the call, guilt ridden Debbie rushes to meet them but Moses needs to go into intensive care and needs further tests. Elsewhere, Megan worries, still wondering if the baby is Declan’s. Meanwhile in the village, Carly’s unconvinced by Ross’s alibi for last night but he manages to win her round. Cain warns Debbie he knows she’s hiding something but when the doctor tells her that Moses needs an operation, her guilt becomes almost unbearable.

April’s pleased to see that Laurel is moving back in but Marlon and Laurel are awkward about the sleeping arrangements. Ashley drops by a letter for Laurel and she worries, realising it’s the results of her HIV test. Is she in the clear? Laurel is truthful with Marlon, who reassures her but as he walks away he’s troubled. Later, Marlon confides in Paddy about Laurel’s HIV test, and explains that he isn’t sure he can share a bed with her. Meanwhile Laurel tells Rhona her worries. Will Marlon and Laurel be honest with each other?

Amelia is on a mission from Kerry as she heads to The Dingles, to carry it out. Lisa later explains to an angry Joanie, Kerry just wants to reach out to her grandchild. Rachel and Jai argue over Archie, with Rachel enjoying taking some power back. So later Jai ups the ante. 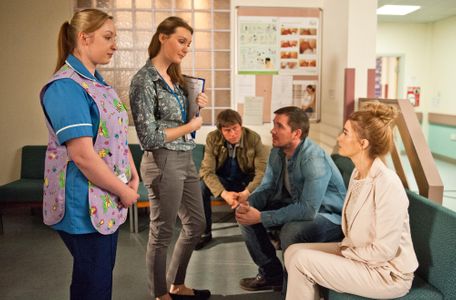