Emmerdale 3/06 - Ashley is in a coma whilst Victoria panics

Ashley lies unconscious in hospital whilst Harriet and Sandy are united in their worry. Meanwhile, Laurel panics when she’s questioned by a judgemental police officer, who implies she had an altercation with Ashley which resulted in him being brought into hospital. Poor Victoria panics to discover Adam’s scrapped her car. She is feeling awful about Ashley so offers to accompany Diane to the hospital. Once at the hospital, Victoria looks on guiltily when Harriet suggests Laurel injured Ashley. Once home a terrified Victoria tells Adam how Laurel’s getting the blame for hurting Ashley. She’s taken aback when he says he’ll take the blame for her. Meanwhile, at the hospital, Laurel lets herself into the toilet cubicle and takes a big swig of vodka. Later. Adam comes downstairs, bemused to see there’s no sign of Victoria. It suddenly dawns on him where she is…

David and Alicia are getting ready to leave. But with things a mess between Alicia and Leyla and Carly holding bad news over the shop it’s going to be an emotional departure.

Emma enjoys having the banter with her boys and likes feeling like they are a proper family; so much so, she invites herself to the pub with James. But at the pub when she sees an opportunity to keep James in the village and jeopardise his move she takes sly action.

Leyla’s exasperated by Jai’s attitude as she tells him how guilty she is about Megan. She soon hates herself for falling herself back into his arms.. 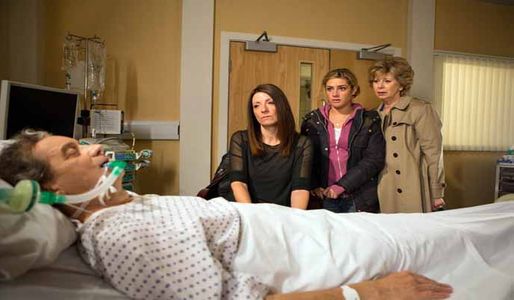