Pete’s suspicious when Ross offers to help with the wedding. At Debbie’s hen do she is secretly hoping nothing will get in the way before her big day. Over at Pete’s stag do, Finn and Cain are on edge when Ross arrives. James proudly gives Pete his grandfather's prized watch as a gift, which causes Ross’ bitterness to increase further. The two parties collide when the hens arrive at the pub. Ross is about to storm out when Pete stops him, soon they are in a heated argument. Everyone is left stunned when Ross snaps and reveals himself as the father of Moses. Debbie fights her panic whilst trying to cover her emotions. Later an anxious Debbie panics to her father about Ross, admitting that they were having an affair. Terrified Ross will ruin her big day, she begs Cain for his help, he agrees - anything to protect his daughter… Meanwhile, at the church Ross takes out a memory stick, which should have contained the ceremonial music but when he tests it, Debbie’s voice echoes round the church, revealing her confession to him, how she was going to give up everything for Ross. He presses stop, and smiles with bitter delight, the stage now set for their affair to be exposed.

Lawrence searches for his mislaid pills but is pleased to finally find them. Later, Chrissie’s confused by his behaviour when he shows up at Debbie’s hen do unsteady on his feet. Lawrence dances with Bernice but loses his balance and drops her. Chrissie’s concerned and gets him home. Elsewhere, an edgy Lachlan phones the police and reports someone’s tampered with Lawrence’s medication, knowing the blame will be put on Robert, but will it work?

Diane informs Val she has a court summons and has to testify against her. The villagers are horrified by the sight of a convoy of fairground trucks rolling into the village. 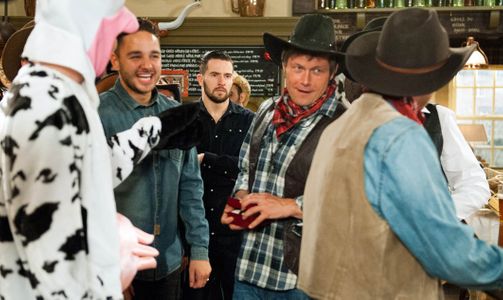