Finn worries he has lost Darren but Victoria is determined to sort things out. Meanwhile, Emma and Val are displeased when Darren arrives back in the village and offers to take Finn out. Val puts a plan into action in order to sabotage their date. Later, an emotional Val struggles to take her HIV medication. But not long after Val offers fake sympathy to Finn but has she gone too far?

Priya is frustrated to learn Georgia has taken down her online dating profile but is left thoughtful after a confrontation with Rishi. Does she have a plan to reunite her Mum and Dad?

Victoria tries to remain upbeat after talks with Moira about Adam moving into hers. Chas later realises Victoria hasn’t told Adam how she really feels...

Will Aaron accept Chas’ offer of money to buy Robert out of the business?

Marlon comes downstairs as Laurel tries to hide wine bottles, she then takes Daisy out for a walk and uses it a an opportunity to ‘dispose’ of the evidence... 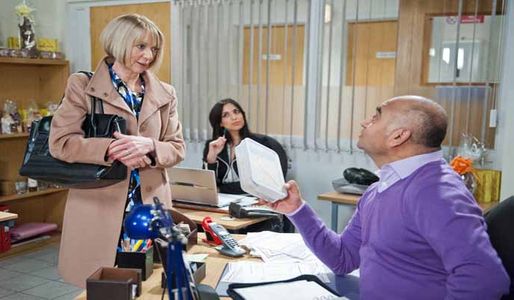