Andy reminds Adam he wants his rent money but jobless Adam is short of money and struggling to make ends meet. Later, he spots two containers of drugs which have fallen out of Vanessa's veterinary bag it’s too much of a temptation for Adam. Later, he asks Pete if he knows anyone who would be keen to buy but Pete is furious, offering to lend Adam money instead. Meanwhile Vanessa panics to realise the drugs are missing and Paddy advises she call the police. Whilst later Adam offers Robbie a proposition.

Guilty Jai is jumpy around Megan when she queries if he’s avoiding her. Megan shows Jai the office and the messy state Leyla has left the desk in making Jai feel even guiltier. But Megan, totally unaware what has happened in the office the night before. Megan does her best to seduce an awkward Jai in the same office. Meanwhile in the cafe Leyla confesses to Priya she has slept with someone. Later Jai and Leyla secretly meet and agree yesterday was a mistake, but are there feelings still lingering?

Finn wants to know why he was attacked and Ross insists he is now safe, as he’s given the guy what he wanted. Harriet finds herself agreeing to help Ashley as he makes holiday plans with Carole. Bernice is dressed sexily for her photoshoot but will it backfire? Andy covers his true feelings from Katie.

Adam and Robbie are high on the drugs and making prank calls to Tracy. Meanwhile, the police arrive at the farm over the missing drugs and Pete discreetly leaves a message warning Adam. Adam heads off to the stables to win Katie back. Moira and Cain watch as Adam staggers around. Moments later Adam vomits and collapses twitching and an ambulance is called. The paramedics put Adam in the ambulance as Pete confirms to Cain that Adam tried to sell him two bottles earlier.

Pollard advises Finn to take more time off work if he needs it and Finn mulls over his advice. Later Finn announces to Pollard and Victoria he wants to find his mum but warns them nobody is to know.

Ashley is set for his holiday with Carole but bemused to learn Kerry will be in the same hotel. Whilst Harriet is pleased, knowing it may scupper any further romance. It is clearly unfinished business between Leyla and Jai. Nicola is surprised her sister Bernice isn’t boasting about her recent shoot, until she learns why! 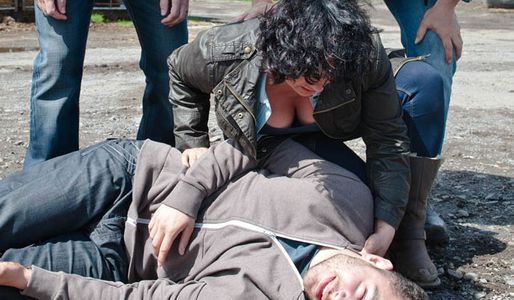