Emmerdale 31/12 - Everything comes to a head for Ross, Debbie, Robert and Andy.

With Finn’s help, Ross seems determined to go ahead with his plan despite the police presence. Andy is forced to make an admission to Robert but what will Robert do with this information? Meanwhile, Pete’s troubled Debbie gave Ross a false alibi for the shooting but will he tell her the truth? Ross is shaken when Robert appears from the shadows and pulls out a gun. Soon it all comes to a head between Debbie and Ross.

Stressed Bernice tries to get people to come to her party but it seems most want to stay at the pub instead. A vexed Bernice does her best to create a party up at Home Farm but it’s a stress for her. Will her New Year’s bash go off like a firework or be a damp squib?

Dan tells Kerry about Cain’s threat. Later, Kerry suggests they all go out to Bernice’s party. It is awkward as they arrive at Home Farm. After everyone’s been kicked out of the Home Farm party, they head to the Woolpack. Meanwhile, Laurel invites Lisa and Belle to the pub. Who will end up seeing the New Year in alone and who will be surrounded by support?

Tess is chuffed when Paddy gives her a bracelet and they fall into an embrace. He panics when she wonders how he’s going to hide the purchase from Rhona. Can Paddy continue to live two lives?

Vanessa’s panicked when she sees something on Johnny’s back and calls the midwife. She’s relieved, but a bit thrown with what the nurse tells her. Moira feels for Pete as he tells her about Ross. Chas secretly arranges to see Gordon but covers when Aaron arrives. 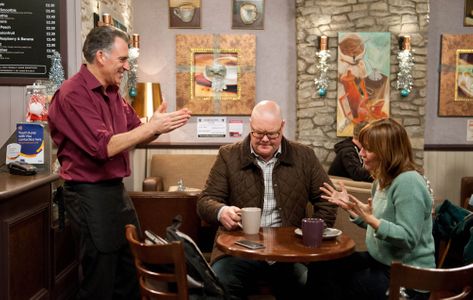