Emmerdale 31/5 - Liv hatches a plan to get at Robert

Liv receives another nasty message from anonline troll and accuses Robert of sending it. Later, Liv runs into Ryan and realises he is theperson Robert paid to lie about Gordon. Liv makes him an offer of her own and Ryan isclearly tempted but will he agree? Gordon’s funeral begins and fairly soon it gets too muchfor Liv and she runs out. Robert heads out after her and she’s thrown when he offers hersupport. They put their differences aside and after Robert leaves, Liv tries to get through toRyan to tell him the plan is off but is she too late?

Adam discovers Cain has walked out on Moira andconfronts him, saying he won’t be welcome if he doesn’t stick with Moira during bad times.But it’s an unlikely villager who makes Cain think twice, when they warn him if he pushesHolly out, her death could well be on his conscience in the future. Later, Cain apologises toMoira, but is quick to wonder if Holly’s been using drugs all this time, as he thinks she’sshowing signs of withdrawal. Moira fumes as Cain presents a drug testing kit. Will Moiraagree to asking Holly to take the test?

Ashley and Laurel are concerned when Arthur seems terrified ofthe pirate ship all of a sudden. Meanwhile, Arthur warns April the pirate ship is haunted andSandy scares them both witless with stories of ghost ships. Later Arthur’s freaked to see thepirate ship lit up, what is really going on?

Belle’s thrown to see Cain collaring Dr Bailey in the village. She demands to knowwhat Cain wanted from him and her concern gives Dr Bailey renewed hope Belle still hasfeelings for him. 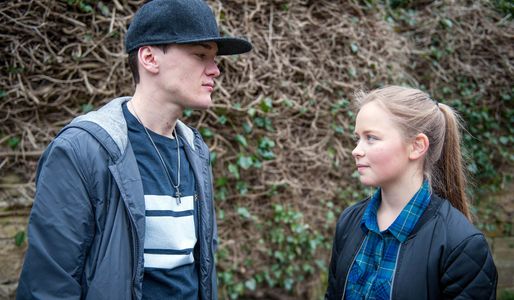