Victoria braces herself as she finally confesses to both Harriet and Laurel it was her who ran down Ashley. Laurel who is drunk, reacts badly and Harriet is not happy either but matters take a turn for the worse when Harriet realises Laurel is drunk at Ashley’s bedside and the pair argue, resulting in Harriet slapping Laurel. Suddenly as Sandy is there too Ashley takes a turn for the worse as he convulses and the machines start beeping. Harriet, Laurel and Sandy are terrified whether Ashley will pull through. Meanwhile, Robert tells Victoria if Ashley doesn’t wake up she could be charged with hit and run, and sent to prison, leaving Victoria worried

Carly hasn’t yet been honest with the Pollards regarding the bank loan and the fact she won’t be able to purchase the shop. Bob urges her to tell them soon. But later when Val overhears Carly telling Ross about their planned deception idea of disguising Pearl as Brenda for the bank meeting, a plan forms..

James is angry believing Chas has lost him the flat. Emma suggests he can stay on their sofa but Finn’s soon suspicious and susses out what Emma has done will he confront her?

Leyla worries she might have jeopardised her relationship with Jai when she is intolerant of Archie.

A drunk Laurel gets in the way of doctors who are trying to treat Ashley so Harriet orders Laurel home. The doctor explains Ashley has suffered a seizure and they need to run tests to find out what caused it. Meanwhile, at the police station, Adam gives a statement to the police but it only makes the police doubt Victoria’s innocence. Back in the village, drunken Laurel sees Sandy sobbing in Edna’s arms and assumes the worst – That Ashley is dead, with disastrous consequences as she passes on the news.

Later Laurel makes a vow she will give up drinking but Harriet is alarmed by what she has just overheard.

Finn listens as Emma admits she’s in love with James and insists he could love her too if he were to be given the chance, leaving Finn worried by the depths of Emma’s feelings. Emma wants Finn to prove her case to James. But can Finn do it?

Leyla offers to babysit, determined to prove herself to Jai but it backfires when she leaves him unattended near a marker pen! Val has a plan and Carly’s anxious, wondering what Val’s up to. Later, Val dresses as Brenda, convinced she can fool the bank, leaving Bob shocked but will he go ahead with the bank meeting? 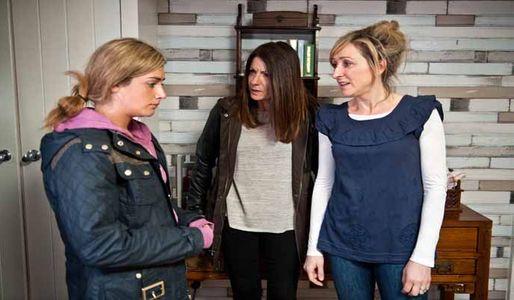