Belle is wracked with guilt and can’t face Dom whilst Zak and Lisa don’t know what to say to him. Belle is quizzed by the police and tries to stay calm, but it’s clear to Lisa that her daughter isn’t telling the full truth. Will Belle tell her mother what really happened?

Pete attempts to talk to Debbie about his pillow talk, but Debbie cuts him off as Chas arrives. Chas tries to get Debbie to talk about it, but will Debbie give Pete another chance?
​
Elsewhere, Pollard is worried about Val’s heavy drinking as she suggests another bender to Kerry. Dom beats himself up over Gemma’s death as he was in bed with Harriet. Declan offers Finn a part-time job, but will he accept it?

Lisa is shocked with Belle’s admission of her involvement in Gemma’s death. Zak dand Lisa agree that telling Dom about the girls argument would be a bad idea. Belle desperately wants to come clean to the police, but Lisa tries to keep her quiet. She realises that Sean knows that Belle and Gemma argued, and worries about what he will tell the police.

Kerry and Val get good and drunk as they wait at the bus shelter. Val begins to show Kerry how to pole dance on a lamppost, and a passing Victoria tells Pollard about it. Val falls and cuts herself, then snaps at Kerry who tries to help her. Pollard helps Val home and tells her she needs to face things.
​
Elsewhere, Finn shines when Declan takes him to the office. Chas despairs when Debbie thinks she’s ruined it with Pete. 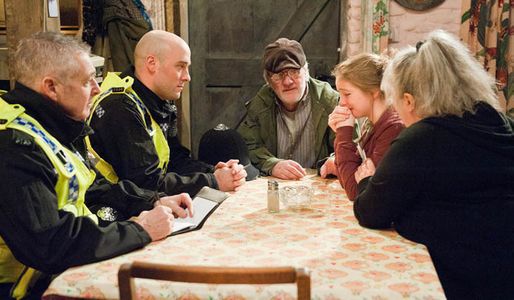