Emma warns Ross that Debbie will only manipulate him and Pete, but he storms out, heading to the garage where he and Debbie find a stolen car left by Charlie. Ross frantically tries to get rid of it before the police arrive. Meanwhile, Emma stirs to Pete about Ross and Debbie. Later, Pete jealously watches Debbie and Ross together, and asks Debbie if she’s sleeping with Ross. Debbie does her best to deflect his jealousy as Peter heads off to find Ross but on not finding him instead tries to frame his brother for stealing. As Pete waits for the consequences to blow up in Ross’s face, he tells Debbie that Ross will get what’s coming to him.

Knowing why Victoria has left Aaron covers to Moira over their departure. Later, Andy covers to Moira and Diane when they are fretting about Victoria and Adam having gone. Robert insists they need to contain the situation before people find out Victoria has run away, as she’s in the frame over Ashley. Robert finds Victoria and Adam’s phones at the scrapyard. Later, Robert tells Andy he has sent a message to Diane on their behalf, in the hope of assuaging her worry, while a troubled Harriet overhears their exchange. Harriet is soon thrown when Robert employs her to track down Victoria and to name her price for the work.

​Bernice continues to lie to Tracy and Jimmy about fictional boyfriend ‘Crispin’. But Tracy smells a rat and decide to play Bernice over it. 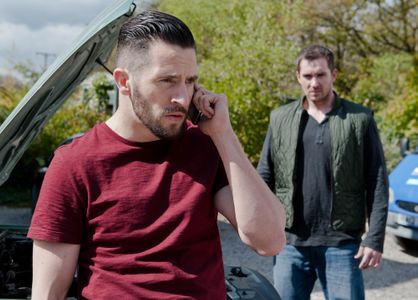