Kirin despairs as he continues to look after a crying Johnny on his own and grabs a can of beer, turning the music up in order to drown him out. A frustrated Kirin is at the end of his tether and screams in Johnny’s face. Carly sees him and takes Johnny away. Kirin pleads with her not to tell Vanessa but can Carly keep this from her friend?

​Robert tells Aaron he was proud of him for going to the police, but Aaron's tormented. Gordon threatens to get Cain sent down for what he did unless Aaron tells the police he lied about the abuse. Gordon’s adamant Aaron won't win, leaving him shaken. Aaron tells Chas about Gordon's threat and she's shocked when he says he's leaving... Meanwhile, Moira and Chas try to hide their dread when the police arrive, wanting to talk to Cain about an attempted murder.

Leyla reassures Nikhil he's enough for her and moves in to kiss him, seductively. However, she's struck with the norovirus and rushes off to be sick. Leyla's embarrassed but Nikhil's determined to look after her as she runs off again...

Paddy's guilty as April says she saw Tess crying at school. He makes an excuse to Marlon about why he wants her phone number. Paddy heads out for a day at the zoo and deletes Tess' number, determined family comes first. 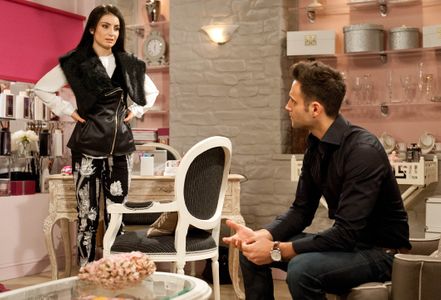