Declan dotes on Charity as she returns from the doctors but she soon has more stress to contend with as she hears her trucks have been trashed. Charity is quick to guess who is responsible. Elsewhere, Megan is amused by the trouble the trashed trucks are causing, commenting that Charity should not go around upsetting people. Later when Jai arrives at Home Farm to collect Noah with Megan in tow, Charity fumes and refuses to let Noah go to football. As Jai tries to calm Charity down, Megan slips off to the kitchen. She makes a beeline for a bottle of pre-opened wine, but Noah, who has followed her in, tells her that it doesn’t belong to her. Megan agrees and puts the bottle back before heading out. Noah looks at the bottle with intent. Later, Noah finds Jacob playing football. He produces the bottle of wine and takes a couple of swigs before thinking better of it. But shortly after things take a sinister turn when Noah collapses.

Alicia decides to fix Leyla up with Colin the fridge man. Elsewhere, Jai doesn’t want to lose what he has with Leyla and tries to convince her they should be together and they kiss. But when a guilt ridden Megan suddenly arrives at the house with bad news about Noah, will Leyla be caught red handed?

Aaron’s hungover and seemingly regretful about his antics from the previous night as Finn sneaks down the stairs. Finn tries to kiss Aaron but it’s awkward. Will Aaron think it was a mistake? Later, Ross fumes on hearing about it and heads to confront Aaron.

Debbie tells Sarah that Pete won’t be moving in after all. Later Charity tries to bribe Pete into forgiving Debbie with a gift.

At the hospital, Charity and Declan are worried about Noah who has been admitted. A concerned Jai arrives, which doesn’t help the situation. Elsewhere, Debbie tries to make up with him ignoring a call from Charity. Chas arrives and tells Debbie about Noah. Pete instinctively gets the keys to the car to rush them to hospital. Meanwhile, Noah’s condition is improving slightly but the doctor explains he has had an allergic reaction to a pesticide. They discuss how Noah could have got hold of pesticide. It’s not long before the finger of blame is being pointed, and Noah’s account of seeing Megan with the wine appears extremely incriminating…

Aaron does his best to ignore Ross who is determined to cause trouble. Later, Cain warns James to persuade Ross to leave Aaron alone. But will James’ efforts backfire? At the graveyard Bob is tidying Donna’s grave, where an anonymous sunflower has been left. Bob clocks an approaching Ross holding another sunflower. Bob is puzzled.

Alicia’s attempts to match make Leyla backfires but Leyla lets it slip she already has a man. Debbie and Charity argue about Pete and Debbie’s heartbroken when Pete refuses to give things another go. Jai tells Megan it was a pesticide that Noah reacted to and not the wine but it’s clear she still feels guilty. 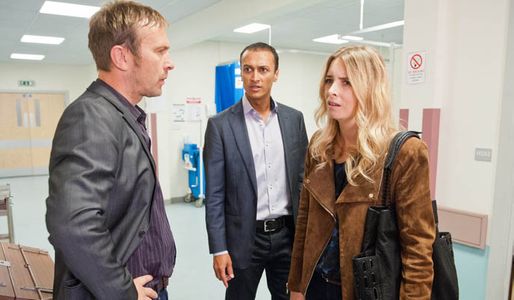 Emmerdale 19/09 – Noah has been poisoned