Emmerdale 19/09 – Noah has been poisoned

Charity seems adamant that Megan is trying to kill her, and maybe her son too, but Declan struggles to accept that Megan would do that. When the police arrive and confirm they found flouroacetate in the wine Noah drank, it leaves Charity with no doubt that Megan is responsible and she wastes little time in telling the police. Later, when the police seek out Megan at Pear Tree, it’s clear they are taking Charity’s accusations very seriously…

Megan is stunned when she is arrested for attempted murder and is devastated when Jai doesn’t stick up for her when she is carted away in handcuffs. As the police explain they found her fingerprints on the bottle, the severity of the situation hits a scared Megan.

Ross tells Finn he’s going away for a bit and Finn thinks it would do him good to have a break, but urges him to come back. Ross goes to his father to take him up on the offer of money; James hugs him, heartbroken for his son. The intimacy with his father reveals the chinks in Ross’s armour. Ross is non-committal about his return and Finn wonders if he’ll ever see his brother again.

Priya and Alicia are suspicious over who Leyla’s new love interest is and probe her. Priya is later horrified to discover from Rakesh that it’s Jai and she wants to have it out with him but Rakesh stops her. If they keep it to themselves they can have the blessing of all her family.

Marlon is finding it hard to spend time alone with Laurel now Doug is staying with them. Soon Doug is forced to tell the truth. 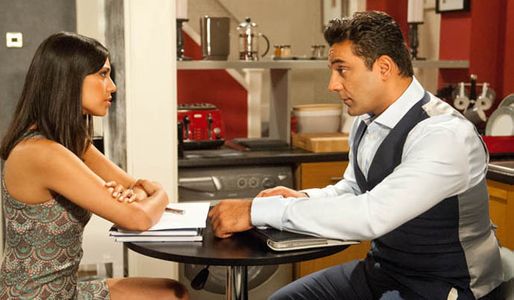