Alicia is worried when a solicitor arrives to speak to her. Caught off guard, she makes her excuses, but they insist they will return to see her tomorrow. Panicked, Alicia thinks this could be to do with the car and whilst David tries to reassure, his admission he forgot to renew the car insurance leaves her even more unsettled. Is Alicia in trouble?

Val lies to Pollard she has told Tiny about her condition and he is fine with it. Later, Val and Tiny tumble out of a taxi as they return from their second date. With Tiny ready and waiting in bed, Val checks he has protection. Suddenly doubtful, Val darts round to the pub to speak to Victoria. Val confesses Tiny doesn’t know about her HIV status. Victoria gives Val some words of wisdom before Val returns to Tiny. But will Val’s date go as planned?
​
Dan presents Kerry with a box, which she presumes is an engagement ring only to discover it’s not. Dan explains to Bob he won’t be bullied into marriage. But Kerry doesn’t want to give up. Who will back down first?

Edna hears of Ruby’s money problems. Finn’s resigns himself to village life when he hears the job in Tokyo has been filled. Donna is grateful when Rhona offers Donna and April a room at their house. Will Donna take her up on it? 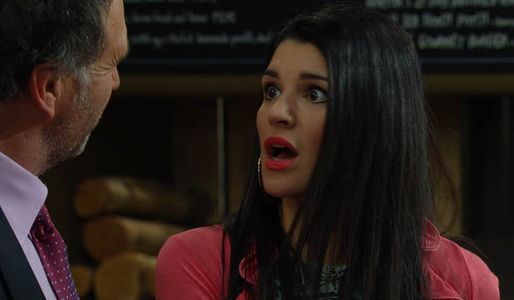