Cain plans to bring Maxine down once and for all and enlists the help of Ross and Aaron. But soon Cain is forced to work independently. He heads to her house and strikes at Maxine when she is least expecting it resulting in her being bound and gagged and put in the boot of his car. Cain arrives with his cargo at the container site and menacingly shows Maxine her new home. Moments later he is caught off guard when Charity and Debbie arrive at the scene and neither he nor Maxine are ready for Charity’s next move...

Ruby tells Ali and Amelia she is leaving for Leeds and doesn’t think she’ll ever be back. The taxi arrives and she says her goodbyes. Ali drops her front and breaks down to Dan.

Juliette arrives at Mill Cottage and dumps a crying baby Carl on Jimmy, desperate for some sleep. Jimmy struggles to settle him and panics when Nicola rings, how will he hide this?

At the salon Kerry is working on Chrissie as Katie arrives about moving her horses back to Home Farm. Chrissie agrees knowing she is putting Robert and Katie in close quarters, interested what could occur. Whilst alone with Kerry, Chrissie recounts the background of her magazine story revealing who it was based on. And later, as planned, Robert and Katie find themselves alone in the stables.

A glammed up Diane becomes irritated as she waits for Doug…

Maxine struggles to appear calm as Charity takes both their lives in her hands as she takes them on a hell drive. Reckless Charity drives dangerously fast making it clear she has nothing to lose. Meanwhile, at the container, Cain makes it clear to Debbie how important it is to get Maxine back in one piece with Adam’s life depending on it. As the drive continues Maxine is full of fear and begs Charity for her life, promising to leave Moira alone, but Charity doesn’t believe her. Suddenly she slams the car to a stop, leaving Maxine battered and dazed before dragging her into a nearby field, just what will she do next?

Chrissie arrives deliberately at the stables to spy on Robert and Katie. Fuelled with Kerry’s story could there be passion at the stables?

Nicola pushes Jimmy into a corner. Could Nicola’s resolve change?

Doug and Diane return to the Village from their date, but was it a success?

Laurel complains to Nicola about her problems at home. 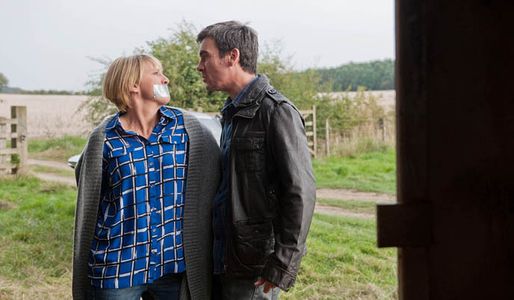