Hollyoaks 09/5 - Sienna and Ben prepare to get married

by Pascale Day Published on 3 May 2016
© Lime Pictures

Sienna and Ben prepare to get married, but Sienna knows she’s walking down the aisle to the wrong man. Meanwhile, Ben asks Jack to give Sienna away and Nico volunteers to take Jack’s place as ‘best man’. Ben and Trevor square up to each other at the ceremony just as Sienna arrives withMaxine and Jack by her side. Sienna walks down the aisle, glancing at Trevor out of the corner of her eye.

Ste is worried when he gets a text from the hospital about his CD4 test results. Harry has lost a memory stick containing his revision notes and goes to the shack to find it. He’s faced with James who is using the shack for storage. Harry asks for James’ help, much to the lawyer’s delight. Leela waits with Ste at the hospital and conversation turns to Lockie. Elsewhere, Harry notices an engraving on the floor of the shack: “Cameron is a killer”. At the Lomax’s, Leela suggests to Cameron that he should call Lockie.

Tony is panicking about his re-launch on Wednesday, while Marnie is a wolf in sheep’s clothing watching him struggle. When Tony can’t afford to pay any of his suppliers, Marnie suggests he contact her loan shark friend.​ 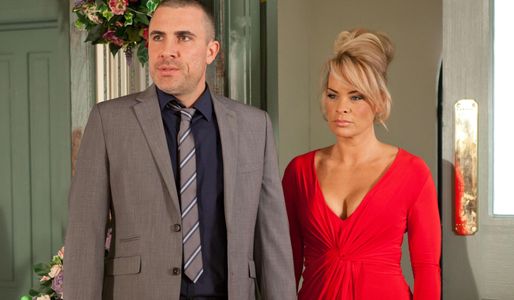 Hollyoaks 03/5 - Ben has a surprise for Sienna

Hollyoaks 06/5 - Ben can sense that Sienna is feeling down

Hollyoaks 09/9 - Sienna Flees A Fundraiser When The Police Arrive