Trevor goes after Ben, convinced he’s the one who attacked him. Meanwhile, Ben is reluctantly doing a road safety talk at the school, where Nico is feeling increasingly ill.

At school, Trevor squares up to Ben, but panic descends when Nico has a heart attack. Ben thinks Trevor is to blame and wants revenge…

John Paul is concerned when Cleo tells him she hasn’t done her coursework yet – other things on her mind. She gets an essay from the internet and John Paul covers for her.

The Lovedays are looking forward to watching Zack’s first football game after Wayne’s attack. However, Joanne reminds Simone about her presentation for the law firm partners today. Simone frantically types up an opening statement and gives it to Joanne, but it conveniently gets lost. Simone has to make a choice between work and Zack’s game…

When Ellie tells Freddie that she like rugby players, he playfully pulls her to the ground. Lindsey is annoyed when she sees them both half naked at the Roscoe’s, does she still love Freddie? 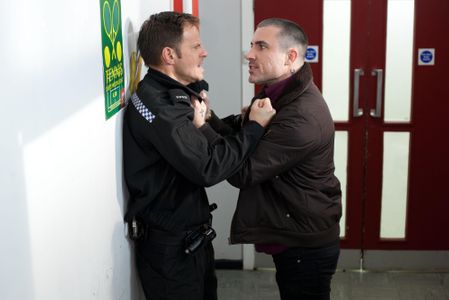