by Pascale Day Published on 3 May 2016
© Lime Pictures

Ben turns up at the Lomax’s to ask Cameron about Lockie. Cameron is about to go for a trip to the lake to spread his dad’s ashes when Leela tells him that Ste is going too. Ste is wary when Cameron ushers him into a rowing boat. In the middle of the lake,Cameron talks about Lockie but the penny drops for Ste when Cameron starts talking about his brother in the past tense. The two men tussle and Ste falls in the water. He can’t swim so Cameron has a decision to make – save him, or let Ste drown.

He’s delighted when Jade tells him her exam went well, until she suddenly collapses. Myra tells John Paul that he’s too good for Scott and taking his mum’s advice, John Paul tries to avoid his new love interest. However, Scott realises that John Paul is ashamed to be seen in public with him and is heartbroken. Mrs St Claire is disappointed when John Paul tells her that he has been influenced by what Myra and other people think of Scott.It’s the big day for The Hutch but when the doors open, no one arrives. 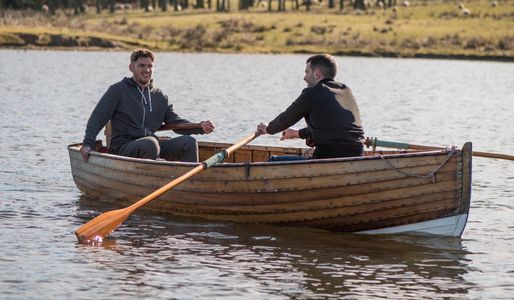 Hollyoaks 11/03 - Lockie teams up with a familiar face

Hollyoaks 09/5 - Sienna and Ben prepare to get married

Hollyoaks 11/09 - Lisa ​helps Lockie out at the burger boat