Dr S’Avage catches Mariam in his office and tempts her with a bottle of whiskey, which distracts her from what she’s found. Mariam escapes from Dr S’Avage’s office and bumps in to Tegan for the first time since the baby swap. Tegan instantly recognises her and sees red. Mariam heads back to Dr S’Avage’s office and starts printing off his records.
Diane offers to take Tegan and Rose on holiday with them but Tegan hates the idea and the mothers have a show-down.

It’s Simone and Louis’ wedding anniversary and when a mystery parcel arrives, Simone thinks it’s for her but it turns out to be drone parts and Louis is in the doghouse. Simone confiscates the drone from him. Dirk discovers Cindy’s debts and him and Jason team up to sell a job-lot of BBQs that have been delivered to The Emporium. Later, Jason walks past The Dog and spots a lonely Cindy. 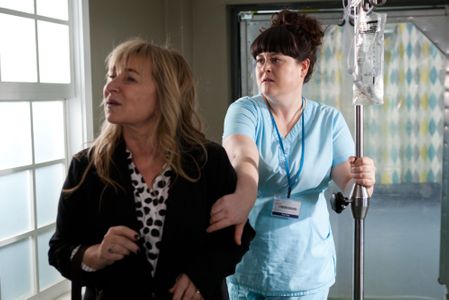 Hollyoaks 12/05 – Will the Lomaxes grow wise to Sienna’s wicked ways?