It’s the day of the German themed student night. Holly is worried about the video her and Nick made and deletes it without telling him. Just as the party starts at The Loft, Nick and Holly go into the office and have sex.

Sienna is trying to speak to Warren, but he wants nothing todo with her. Elsewhere, Joel warns Bart to leave. But Bart wants Joel’s watch and chain or he’ll reveal the truth about Katy to Warren. Warren questions Joel about Bart’s whereabouts as Sienna turns up at the garage. He tries to ignore Sienna so she makes a surprising confession​.

​Neeta and Maxine are on the look-out for Darcy and get a tip off about a waitress named Rebecca who could put them in touch with her. However, when they meet Rebecca, she claims to know nothing about Adam’s missing fiancée. Back at home, Maxine makes a discovery that prompts her to return to the café.

Esther volunteers for a shift in the coffee shop. However, it’s clear when Kim leaves that Esther isn’t ready. Prince notices Esther is struggling and manipulates free food out of her. 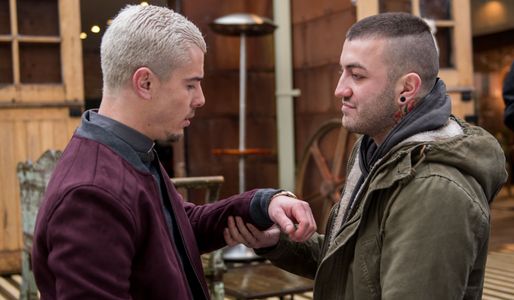