Pete is rattled when Cleo tells him she knows about him and Jade. Cleo tells Jade to leave Pete alone and lies that it’s because she’s taking up too much of his time. She tries to kiss Pete but he backs away, making her more paranoid.
​
Ste brings Tony bad news about the Pride festival, but it means he gets to see Harry again. Tony rushes out to solve the problem, leaving Ste and Harry alone. At school, Tony asks John Paul if they can use the school for the festival as a backup. Harry arrives and an empty condom wrapper falls out of his bag in front of John Paul and his dad! Later, he’s just about to leave for his date with Ste when Tony turns up with John Paul and tells him his school work comes first and confiscates his phone. Elsewhere, Ste is waiting.

Kim makes Lindsey breakfast and offers to make dinner in an effort to win her over. She’s furious by Lindsey and Freddie’s closeness and decides to break them up for good.

Robbie follows Trevor to an unfamiliar address and is surprised when Grace pops her head out of the window. She’s furious at Trevor and throws toilet rolls and a wet toilet brush at him. Trevor spots giggling Robbie as he drives away and wonders why he’s being spied on… Trevor tells Robbie that he’s leaving with Curtis. Robbie goes back to Grace’s b&b and tells her she needs to come back. 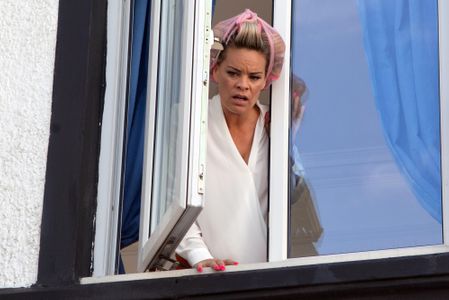