Wayne gives Lisa until the end of the day to get the reward money back for him. She panics when Lockie tells her he’s already spent the £3k loan from Simone. The ‘Tugboat Grill’ launch is a success, until Lisa finds out Wayne has tampered with all the burgers. She snatches a burger away from Zack and lies that she didn’t store the meat at the right temperature. Everyone demands refunds, while Lisa concedes to help Wayne.

Ben asks Trevor again whether he killed Carly but starts to doubt that Trevor is to blame when he sees how vulnerable he is about Dylan. Dylan’s hearse pulls up in the village. Trevor and Ben arrive, and Sienna panics when Ben says they need to talk about Nico. At the funeral, Ben is affected by Trevor’s emotional words and has to leave. Sienna realises she can never move on with Ben and decides to tell him the truth about Nico.

Harry has a shower at Diane’s flat when the plumbing breaks at the Boarding House. Ste is uncomfortable around half-naked Harry and tells him that they’re never going to be together. Thinking Harry is pining over Cleo, Tony tells his son to write his feelings in a letter. Ste calls Harry’s bluff when he threatens to tell Tony about him being gay, so Harry backs off. Harry drafts an email telling Ste how he feels but Tony finds it. He knows it’s not for Cleo when he reads about there being a baby involved.

Nana visits Derek again. He’s dying and he wants her to forgive him for how he treated her when they were together. She makes him promise not to tell Reenie she was there. 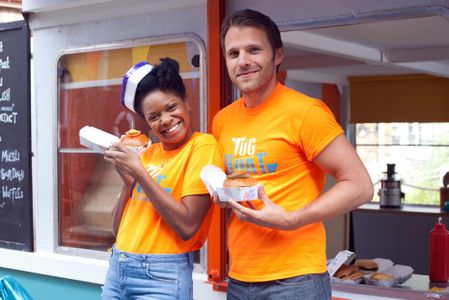 Hollyoaks 16/09 - Lisa is hiding in the village

Hollyoaks 23/09 - Sandy gives Joe the shock of his life

Hollyoaks 11/09 - Lisa ​helps Lockie out at the burger boat