Ste and Harry exit The Hutch early morning and bump into James. James threatens to tell Tony unless they can come to another arrangement… Harry surprises Ste with a place to stay, but Ste is under-whelmed that it is just a shack with some fairy lights and an electricity generator. He eventually gets excited and agrees to stay there, but James is watching with a smirk, what does he want with Ste and Harry?

Maxine is haunted when she finds Patrick’s wedding speech for Sienna that Ben had been keeping safe. Elsewhere, Maxine has got drunk at The Dog leaving Neeta concerned. Darren arrives to get her and when she hints at their secret to Tegan and Neeta, he drags her away. However, she slips and hurts her hand. At the hospital, Maxine and Darren talk about Patrick but someone has heard them. Joanne meets Margaret who asks her for money so her andLisa can get away. 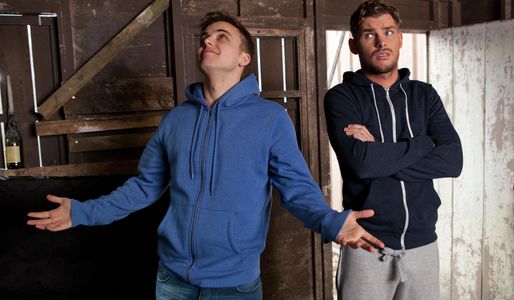 Hollyoaks 14/01 - Maxine and Theresa team up to save Dodger