John Paul tries to avoid Mrs St Claire, thinking she’s got a crush on him. Louis believes it too when Mrs St Claire invites John Paul to go to a head teacher’s conference on her behalf. Elsewhere, Myra panics when Diego gets his hands on some of Nana’s photo albums. Thinking Myra is thirty-eight, he’s confused by some of the pictures. John Paul confronts Mrs St Claire about the special treatment she’s giving him but upsets her and she sends him home. Myra is furious and storms over to the school to confront Mrs St Claire.

Tony is keen to collect the winnings, but Darren is trying to delay so Tony won’t have the money for his new business venture. Meanwhile, Scott – dressed as Skittles the clown – frightens Esther and she slaps him. James spies on Darren and finds out about Tony’s bet, while Marnie puts doubt in Diane’s mind about where Tony got the money. Scott arrives at The Hutch flanked by Esther and a mob of parents with children for his clown show, which goes spectacularly wrong and Myra ends up injured when she slips over. Elsewhere, Darren is startled to find James sat in his office chair but James has a plan.
​
Alfie continues to hide the fact his Cancer has returned as he goes with Jade to her last chemo session. He brushes some hair from her face but it falls out in his hand. Jade is mortified and locks herself in the bathroom. 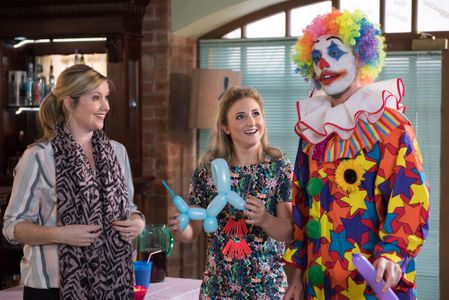 Hollyoaks 10/3 - Peri wants to be friends with Tom again