Unsure about whether she wants to spend her life with Joe, Mercedes asks Freddie if she can go with him when he tells her he's moving to Valencia to work in his friend's bar.

Ben finds Sienna and Nico before Ashley does and puts them in an interview room at the station for safety, but Ashley is watching from the shadows. Sienna and Nico are alarmed to hear that Ashley is after them and think she must know about their part in Carly’s death. The fire alarm goes off at the police station and Ashley has disguised herself as a police woman and is leading Sienna and Nico away from the station. She locks them in the car and threatens to pour petrol around them.

Robbie and Jason fight over Holly, and Jason tells Trevor that Robbie is working for the police. 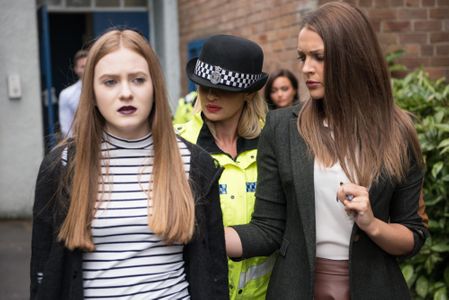 Hollyoaks 16/09– Trevor and Freddie embark on a rescue mission

Hollyoaks 16/01 – Freddie frantically searches for his loved one

Hollyoaks 27/06 – Will Mercedes and Freddie be held responsible for their actions?