Joe is banging on the McQueen’s front door but Mercedes doesn’t want to see him. Pete makes Cleo promise not to say anything about their relationship to Reenie, while Myra urges Mercedes to tell Joe the truth about Gabriel.

​Mercedes finds him at Gabriel’s grave. Joe tells her he still loves her but Mercedes can’t bring herself to tell him that he’s Gabriel’s father. The McQueens go head to head with Mac, Ellie and Rachel who are unaware that they’re meant to be hosting Reenie and Pete’s wedding in The Dog tomorrow. Cleo reluctantly steps in to save the day but she’s heartbroken when she finds out Pete is still messaging Jade. She swipes Jade’s phone and messages Pete to meet her in The Folly. Pete darkens when Cleo threatens to tell Reenie what he’s been up to and she’s frightened when she gets a glimpse of what he’s really like…

Holly walks across The Dog car park and is oblivious to the speeding campervan heading her way, until Robbie saves the day. ‘Diego’ apologises but Robbie sends him packing. Holly tells Robbie to leave her alone, but after a chat with Diego about passion, Holly starts to wonder whether Robbie is who she really wants. Elsewhere, Diego asks Darren where he can find ‘Countess MacCoin’.

Mac, Ellie and Rachel prepare The Dog for the McQueen wedding but their lovely decorations are scrapped when Myra and Reenie want the venue to look more tropical. Rachel is concerned that Mac is still brooding over Neeta and makes a phone call. Myra pales when Diego walks in, half-naked hoping to use the pub’s shower, what is she hiding? Mac is stunned when Neeta turns up. He proposes to her but when he hears Cindy is coming back from her holiday tomorrow, he needs to get a divorce, quick! 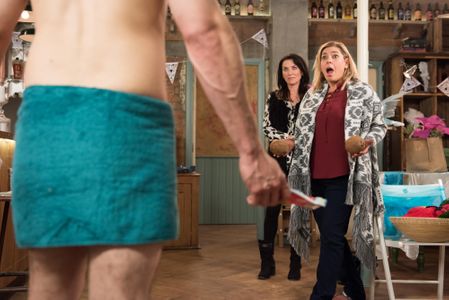