Mercedes tells John Paul her secret. Kim puts the photos of Trevor and Val kissing in an envelope marked ‘Grace’. Trevor finds the envelope before Grace does, thinking Val’s to blame. But when he questions Val in the village she denies it. Esther’s baby shower is taking place at The Dog and Kim realises Grace hasn’t seen the photos of Val and Trevor so shows them to her on her phone.

Tegan is upset with Ziggy but neither is prepared to give an inch. Tony hears Rose is ill with German measles. He goes round to see her and surprisingly, Tegan lets him. Ziggy returns to find the pair embroiled in a game of Twister, he’s seething with jealousy.

Cindy finds a Dictaphone and uses it to make notes for her novel. A Swiss girl called Zoe messages Holly - Holly assumes it’s about a school reunion at her old boarding school because Zoe is asking for emails of all the school girls. Cindy attempts to get herself a book deal to raise money so Holly can go to her school reunion. 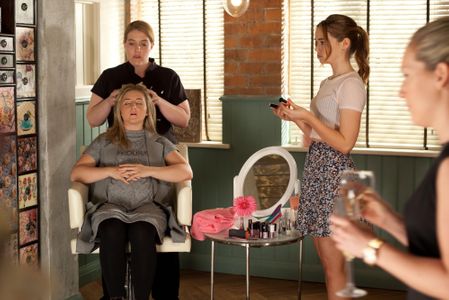