Freddie and Lindsey ask Joe if he’d like to move back to the Roscoe’s but he says ‘no’. Mercedes turns up at the Boarding House and both she and Joe go to the hospital for their baby’s first scan. Mercedes wants to help Joe make amends with his family and persuades him to move back home.

Lockie is concerned that his wife has been out all night. Meanwhile, Porsche is fast asleep leaning against the doors of the garage; Darren and Cameron find her and take her to the Boarding House. Celine arrives to take her home but Porsche refuses to go back to the McQueen’s. She’s still drunk and makes a pass at Cameron. Elsewhere, Lockie finds Mercedes’ scan photo and panics. Porsche finally returns home.

Maxine sees Nico and Sienna at Esther’s Magic Bean and decides to do some digging. She probes Sienna about Carly’s murder, which prompts Nico to lash out and run out of the coffee shop. Maxine thinks Nico’s reaction points to Sienna’s guilt. Ben finds Nico sitting by the river. He has Carly’s things in a box and gives Nico a charm bracelet, but she can’t accept it. Maxine sees Nico again in the village and continues to interrogate her. Sienna jumps to her daughter’s defence and when Maxine and Darren bite back, it looks like Nico is about to confess… 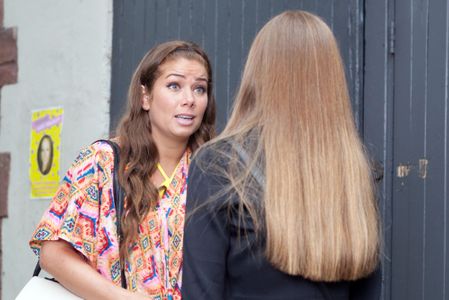 Hollyoaks 15/9 - Joe Must Choose Between Mercedes And Joanne