Cindy’s attempts at making the wedding cake are terrible but it breaks the ice between Cindy and Dirk. They call a truce and for a second it looks as though they may kiss…

Robbie is forced into organising Jason’s stag do. He hires a stripper but just as Jason’s in the middle of his dance, Holly arrives, furious. Holly is jealous when Robbie shares a kiss with the stripper and back at The Roscoe’s she realises her feelings have resurfaced and texts him. She heads to The Loft to find Robbie.

Celine is suspicious when Cleo’s phone keeps ringing and she listens to a voicemail from Tony. Getting the wrong end of the stick, Celine tells Diane about her suspicions. Back at the flat, Diane is uneasy over Celine’s accusations and searches for clues. She finds Cleo’s bracelet in her bed and storms down to The Hutch as Tony tries to talk to Cleo. The damage that Pete has done to Cleo is obvious to everyone. Celine goes to see Pete and, in a rage, accidentally reveals about Cleo’s error of judgement with Tony. Pete decides to use this to his advantage and Celine realises she may have put the trial in jeopardy. She talks it through with Lindsey. Later, Pete is sleeping in the back of his van when a hooded figure attacks him – is he the latest victim of the Gloved Hand Killer?

Dirk goes to solve a plumbing problem at The Dog and discovers a laptop has been dumped in the river - Dr S’Avage’s laptop. 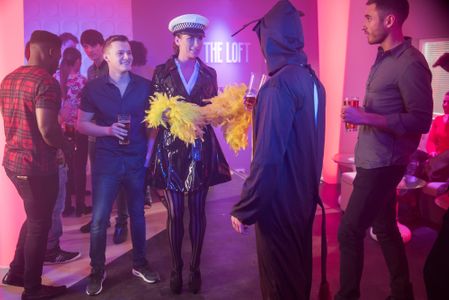 Hollyoaks 19/01 - ​Maxine and Theresa find themselves in grave danger