Hollyoaks 19/4 - The Nightingales are concerned about Nathan

The Nightingales are concerned about Nathan not coming home last night. Meanwhile, Nathan wakes up on a park bench and continues to drink. He returns to The Dog but when Rachel’s hearse pulls up in the car park, he hides in the Roscoe’s garage. Freddie finds him and urges him to go to the funeral, for Rachel. Nathan stands on The Dog patio where the wake is taking place inside. He’s frozen to the spot when Holly takes his hand and offers to go in with him.

Elsewhere, Marnie threatens Freddie to stay away from Ellie, while Darren finds out about Freddie and Marnie’s night together.Kim is a nervous wreck, waiting for Lindsey to pounce. Esther manages to calm her nerves, but as Kim leaves the coffee shop, she spots Lindsey disguised in a blonde wig. Kim and Esther decide to leave for good. Kim realises how much danger she’s put everyone in and tells a heartbroken Esther that she has to leave on her own.

Cameron can see Leela is missing Ste and he’s not happy about it. Leela helps out at the burger boat when her hours get cut at the fire station but she’s fed up of Cameron’s micro-managing. Ste suggests she set something up on her own and out of spite, she tells Cameron that she’s starting her own cleaning business; he’s furious that Ste has interfered again. 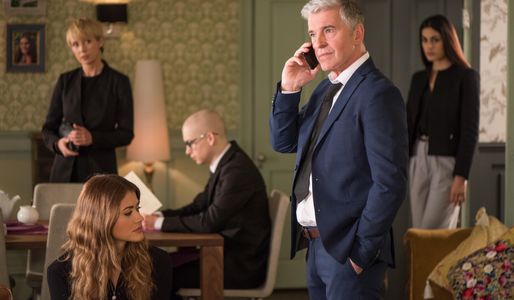 Hollyoaks 27/02 - The Grieving Nightingales Prepare For A Funeral